Seeing snow on the ground is always alarming when you own a rear wheel drive vehicle. Or live on the side of a hill. I happen to check both boxes. Now here we are, President’s Day 2016, and we’ve got nearly 2″ of fresh snow on the ground. Thankfully the previous owner had a set of Bridgestone RE970AS all-season tires installed.

Like most all-season tires, the Bridgestone RE970AS carries the M+S designation, meaning it’s supposed to be capable of providing adequate traction in both mud and snow rated. The question is always how much mud, and how much snow.

Disclosure: Tread depth on the Bridgestone RE970AS is 11/32″ when new. Mine are at 9/32″. Depending on your mileage, if these tires were installed in the summer it wouldn’t be unreasonable to think this amount of tread depth would be remaining come winter.

Looking at the quick specs of the Bridgestone RE970AS, it’s important to note that it falls under the Ultra High Performance All-Season category. In non-legal terms, this means that while the tire may get you through a little white stuff if it shall fall, the primary purpose of the tire is dry and wet performance when temperatures are above freezing.

My first trip of the day was at 9 AM. There roads had yet to be plowed and there was a good inch of snow on the ground. If I had a set of summer tires I would have opened the garage door, then shut it again. But this time I’m on all-seasons. We’ve got this, right?

The M3 rolled backwards. Crunch. We’ve made impact. With snow. A little feathering of the clutch and we’re backing down and out of the driveway, just long enough for a full-size van, or two Mini Coopers. Now down a slight grade to a stop sign. Gentle on the brake pedal and the 245 width steam rollers bring the car to a stop without fuss.

I decided to brake hard from 20 MPH coming to the stop light at the bottom of the hill. Immediately the front tires locked up and the car began to slide without much indication of deceleration. The ABS pump was going wild, rapidly releasing and locking the brakes. The car came to a stop but the hell if I want any part of that in an emergency braking situation. Even with an inch of snow, these tires need thoughtful input on the brake pedal.

Accelerating was also fun. If your definition of fun is gently applying throttle as if pacing a sidewalk pedestrian, then that’s mine too. Any more than the slightest bit of throttle would result in the rear tires lighting up and traction control lights on the cluster going berserk. 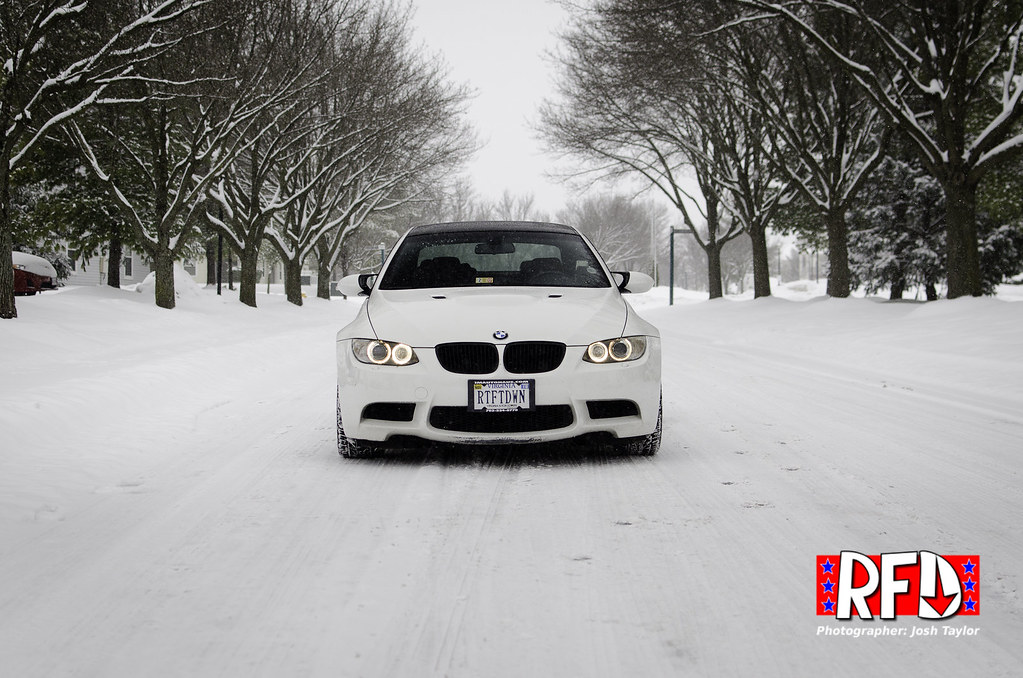 The last thing I wanted to do was end up with my car parked on the side of the road like those other BMW’s in snowstorms. I’m at the bottom of the hill and can barely accelerate. At this point I wasn’t sure I was going to make it back up the hill to get home. But the more I drove the car, the more comfortable I became and by the time I reached my destination I was feeling pretty good about getting around.

Parallel parking at my destination resulted in the rear of the car sliding sideways toward the curb. Not cool. I managed to pull forward and back gently in an effort to pack down the snow for more traction. Whether or not that actually helped, I’m unsure, but I did manage to pull out and head back home without much fuss.

Interesting thing to note, on deceleration, the rear tires would lock up and slowly send the car sideways. I believe this was due to the differential and the 265 width rear tires effectively hydroplaning over the snow. In any case, it certainly kept me on my toes.

Obviously the Bridgestone RE970AS’s were not intended for snow but they got me across town and back. Near my home was an empty parking lot. With a GoPro camera in the back seat, I decided to mount it in a few different locations on the car and demonstrate the snow hooning ability. It’s a small parking lot, so don’t expect too much.

No that wasn’t too exciting but the take-away is that I was able to get around without shoveling my way out. That’s a lot to ask of an Ultra High Performance All-Season, even in only an inch or more of snow.

Depending on where you live, the Bridgestone RE970AS can be a true all-season tire. Would I buy this if I lived in Pennsylvania? Hell no. For DC and parts south, absolutely.  I still don’t believe in all-season tires.  However, if you absolutely refuse to have multiple sets of tires, then I guess these aren’t the worst thing to have between you and the road.

Project MJ: Back To Basics

Pearl RearVision: A Backup Camera For Any OBD2 Car

I’ll watch just about any car show on TV.  From the obvious, and epic, productions like Top Gear…